Is ADHD an obstacle in your writing career? The answer may surprise you

ADHD (Attention Deficit/Hyperactivity Disorder) sure sounds scary, doesn’t it? The term has “disorder” in it. What could be scarier for a writer than an issue related to paying attention? So, does that mean anyone wanting to be a writer with this disorder can’t be good at his job? Relax, and check out at the positive side too before you start worrying. We have interesting stories for those who have heard names like Bill Gates, Agatha Christie, Jules Verne, Albert Einstein, and many more

An articulate writer uses words in various styles to communicate his/her ideas clearly to the readers. Not everyone can be a successful writer, but can you think of some notable writers who battled ADHD and STILL came out winners? You would think disability and writing don’t go hand in hand, but fortunately, that is not the case. ADHD minds come with their own style of functioning and are not necessarily impaired.

What is ADHD and how can it be spotted?

ADHD (Attention Deficit/Hyperactivity Disorder) is a medically diagnosed disorder in children and adults. Symptoms appear in children below 12 years of age and continue through adulthood. Typically, the symptoms could relate to paying attention, hyperactivity, and uncontrolled behaviour. These symptoms must not be ignored as they may negatively affect the daily lifestyle of the affected person.

While it’s easy to spot ADHD in children, it may be harder to identify in adults. Many people remain unaware until things start worsening and they start facing problems such as:

How could ADHD potentially interfere with your writing career? 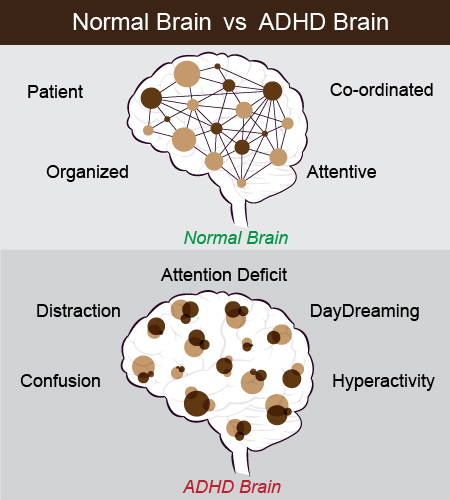 How does an ADHD brain see the world?

ADHD brings forth a horde of behavioural patterns which deviate from the general societal norms. People, especially children suffering from this condition face great trouble in paying attention to tasks and are often lost in day-dreaming. With the attention deficit comes the add-on factor of a hyperactive behaviour. Owing to this aspect of the condition, the individual seems to be restless and fidgety all the time. Another bizarre trademark of ADHD is impulsivity and recklessness. The addition of these elements to the management of ADHD, makes it a daunting task.

On the face of it, writing appears to be a task which demands colossal amounts of attention, patience, and basically sitting still for extended hours. Imagine a writer, deeply engrossed in his/her work. Immediately, a fleeting image of a person, sitting calmly over a computer (or a typewriter, if you are old-school) with his/her fingers gently tapping away on the keys, appears in your mind. Almost nobody would think of a jittery person, drowned in copious amounts of caffeine, staring impatiently at a blank page, while a thousand thoughts run across his mind.

Because we never associate the creative act of writing, which inherently demands poise and patience, to a condition that renders a person instinctively impulsive. To understand this better, let us take a quick look into what goes on in the brains of writers.

The graphic here, developed by Hashtag17, a web designing service depicts the frame of mind of a typical writer struggling to write with ADHD. 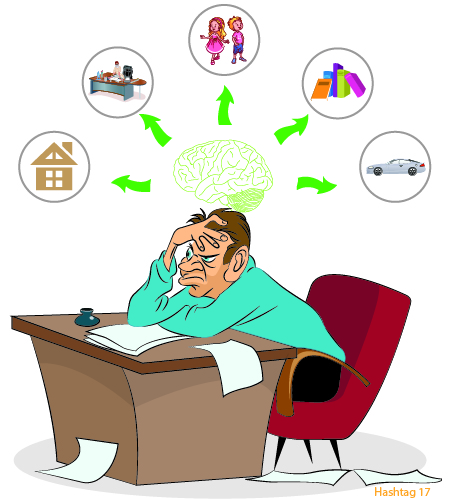 Issues that only an ADHD writer would face.

Writers depend on the different regions of the brain working in tandem to produce beautifully crafted words that stir our emotions.

These people draw in from their own experiences, knowledge, and imagination. They have great control over language and a clever grasp on what attracts and interests the reader.

In the people with ADHD, such streamlined working of brain is thrown out of whack.

Instead of these elements working like the cogs in a machine, they all run haphazardly.

Consequently, rather than having a coherent train of thought, people with ADHD have what appears to be a badly-congested traffic jam, made up of numerous ideas. In addition to these mental attributes, the physical volatility caused by ADHD makes it even more difficult for people to stick to a seat and write for long.

What lies in store for you, as a writer, if you suffer from ADHD?

If you have faced similar tribulations, or know someone who is struggling to make the disparate ends of writing and attention-deficiency meet, understand that it’s not the end of your writing dreams. In fact, the same attributes of ADHD that made it almost impossible for you to sit and concentrate can actually kick-off your writing career!

The internet is replete with articles which present ADHD as a learning disability. These discuss in length how challenging it is to control and monitor people suffering from ADHD. The fact that it is medically recognized as a ‘Disorder’, does more harm than good. Such negative connotations have given rise to a culture, which dismisses every personality trait of an ADHD individual as a weakness or hindrance. Such thoughts permeate through our educational institutions and areas of work too. People who are diagnosed with ADHD feel crippled and rejected. Like immigrants, they are asked to fit-in and repeatedly reminded of their supposed disability. If these findings were even half as true, there wouldn’t have been a single ADHD person succeeding, even marginally, in his/her life.

But history tells us otherwise. 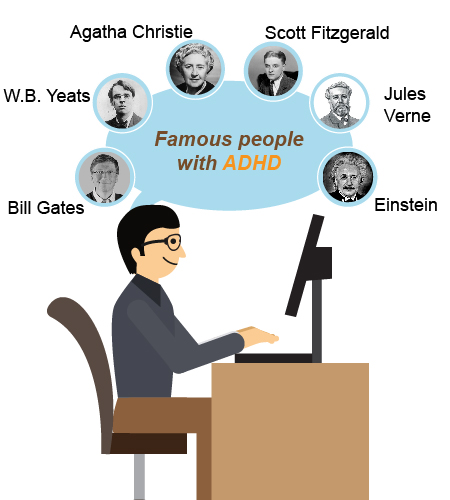 Intellectuals who were diagnosed with ADHD

The name of Albert Einstein pops up almost every time someone is being lauded for his/her intellectual prowess. Little do people know that the man who revolutionized modern physics once struggled with ADHD. Not far behind, is the business tycoon Sir Richard Branson, who not only owns one of the most successful airlines in the world but also a group of beautiful islands in the Caribbean. Be it America’s beloved president, J.F. Kennedy, or the greatest basketball players of all time, Michael Jordon – it is hard to believe that these people, in fact, suffered from ADHD.

At this juncture, it is easy to deride these facts since they, on the surface, have no connection whatsoever with the art of writing. But you couldn’t be farther from the truth. History is rife with examples of people with astounding creative intellects who were actually diagnosed with ADHD. Consider the examples of Walt Disney, Jim Carrey, and even the popular actor Will Smith – all these personalities have been medically diagnosed with ADHD and yet attained the peak of their respective creative careers.

Narrowing our focus to popular writers, who have faced the brunt of ADHD, the most notable name will always be Agatha Christie. Imagine selling 4 billion copies and being regarded as the highest benchmark of mystery writing – in spite of suffering from ADHD. And why forget Scott Fitzgerald, the iconic American author who wrote “The Great Gatsby”. In this ever-increasing list, one can come across several illustrious names such as Scott Adams (creator of Dilbert comics), Jules Verne (a pioneer of sci-fi genre) and even the famous W B Yeats.

It seems surprising that there are so many distinguished personalities who were diagnosed with this learning disability. And this is where our definition of ADHD crumbles in the face of cold hard facts. While ADHD is traditionally viewed as a disability or disorder, it isn’t actually as much a hindrance. In fact, new findings indicate how the typical traits of ADHD can really prove to be your ticket to fame and success as a writer.

How can you leverage your ADHD traits to be successful in writing? 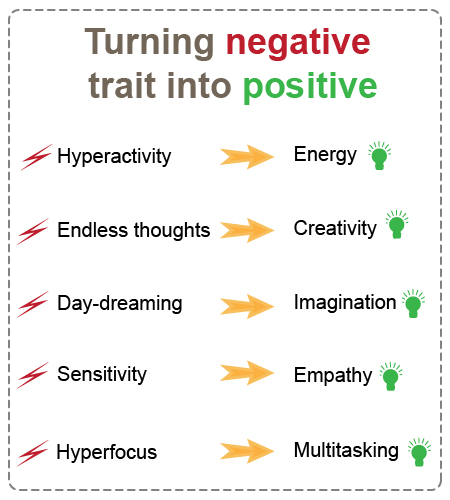 Turn ADHD negatives into your strengths

Now that we know that ADHD undoubtedly brings in added benefits to the creative sphere of writing, let us take a closer look into how can we enhance writing skills in people with ADHD. 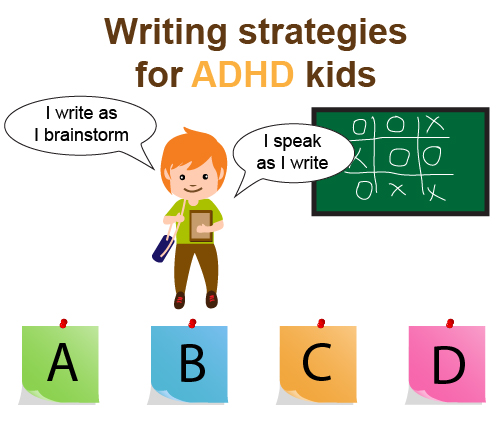 Dealing with ADHD in kids is more delicate in nature than in the case of adults. ADHD personality traits may make it difficult for the child to sit and concentrate for hours in the fixed school routines or to put in effort for doing tasks that are boring and repetitive. Doctors often advise parents to have a deeper understanding of their child’s condition and not have over-dependency on medications. They should know where to draw a line between being overly stern and disciplining the child or giving them more freedom to do what they like. With these factors, comes the burden of making your ADHD kid finish the homework in time, especially the ones related to writing essays or articles. If you are struggling with this issue, you will find the following ADHD writing tips for kids exceptionally beneficial: 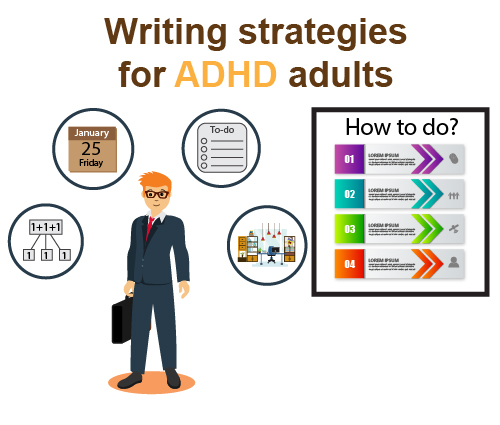 Organizing skills are a must for ADHD adults

When it comes to professional-level writing, work-related articles, or even resumes or emails – writers with ADHD find it a herculean task. It is of no surprise that people with ADHD have a tendency to swing between the extremes. Their need to be perfect but their inability to focus often delays the submission of writing materials (esp. emails). Also, at times, their hyperactive nature makes them submit work which is hastily written. To avoid these common pitfalls, follow these proven strategies for ADHD adults at work:

These techniques have shown proven results in bringing marked improvements in the writing skills of people with ADHD. Other important factors that are essential to managing ADHD traits are regular sleeping patterns, a good amount of physical exercise, and a nutritious diet. People with ADHD need to limit their caffeine intake and develop the habit of planning their day/week in advance to further avoid inadvertent digressions. Mastering time management and organisational skills are of paramount importance here.

If you have been diagnosed with ADHD, remember that no deterrent can stand between you and your dream of becoming a published author. It is imperative for parents, guides, teachers, and supervisors to understand and appreciate what ADHD can encompass. The wise words of Albert Einstein can help us make sense of this condition – “Everybody is a genius. But if you judge the intelligence of a fish by its ability to climb a tree, it will live its whole life believing that it is stupid.” Being different from the crowd is not always bad. In fact, it brings in more diversity. Today’s world is run by geniuses and leaders who were revolutionary in their thinking and radical in their approach. ADHD personality traits too lie within this creative range. Energy, spontaneity, and dynamism – an individual with ADHD brings all these exciting elements to the table. It is up to us how we view and encourage their unique behavioural attributes in the arena of writing.

How to critique a website
An active Facebook life can motivate students
Great ways to stay in shape while in college
How to write a humanities paper
How do you write a literature review?
Need to survive school? Learn all these and more!