A policewoman in downtown Detroit, Michigan takes a break from duty to play basketball with a young boy. 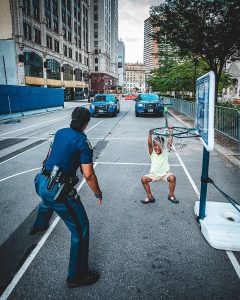 From the image above, the case demonstrates the role of the community-policing relationship in child development.  Demirkol and Nalla (2016) suggest that community policing is the process whereby society and police work in collaboration to enhance understanding of community and law. Interacting with children, in such as case like playing basketball, help to clear the fear perception, parent install their children as they grow. For example, when a child cries for a long time with no signs of keeping quiet, the mother threatens to call the police. A child from such a setup will develop a fearful notion about the police. Therefore, the policewoman in the image plays an interactive role and aid in clearing such a perception.

Besides, the picture depicts that the role of a woman reflects the social attitude of a mother. In all societies, women are caregivers who care more about their children (Demirkol & Nalla, 2016). In this context, the policewoman realized the child needed to play but was unable because he was alone in the street. Thus, halting to play with the kid, she extended the motherly role of a woman. Also, it shows a clear understanding of children’s development needs, care, and concern, just like other mothers (Demirkol & Nalla, 2016). Therefore, the context shows that police is also human being. Further, the police will only arrest those who have committed a crime, but not everyone along the street (Demirkol & Nalla, 2016). Hence, the police are human like any other member of the community. In conclusion, other than enforcing the law, police should interact with society. In this way, it will help in the understanding of crimes, the community, and the balance of the law.