Media reports and social commentators have extensively affirmed the existence of a positive correlation between immigration and growth in the rate of crime. The prevalence of this trend has significantly increased the victimisation of immigrants (Bell, Fasani & Machin 2013). European countries have over the past decade become increasingly concerned about the rising rate of immigration (Machin & Costas 2004). As one of the European countries, the United Kingdom has experienced a remarkable increase in the number of immigrants in the country since the 1990s. The growth in the number of immigrants to the UK can be explained on the basis of two main waves. The first wave relates to the period ranging between 1990 and early the 2000s in which the UK experienced a considerable increase in the number of asylum seekers. Over the recent past, the number of individuals seeking asylum in Europe has further increased the rate of immigration. According to the Office of National Statistics, the number of asylum applications in the UK has increased over the past five years (Dearden 2016). Conversely, the second wave occurred in 2004 after the UK joined the European Union and is commonly referred to as A8 (Bell, Fasani & Machin 2013). The A8 wave is due to the free movement policy arising from the EU agreement. The free movement agreement has significantly increased the number of legal and illegal immigrants in the UK (Keinis 2016).

Despite the benefits associated with the concept of free movement under the EU agreement, the subsequent growth in the rate of immigration has increased security concern amongst security institutions across Europe (Aliverti 2014). The situation is worsened by the refugee crisis in Europe arising from armed conflicts in Asia. Similarly, anti-immigration groups have used fears of criminality as one of the key focus of their campaign by arguing that immigrants adversely affect crime rates. Efforts to enhance security have led to political debate and policy changes with reference to immigration (Nunziata 2015). This indicates that immigration is progressively associated with crime. In light of this assertion, this paper analyzes the relationship between immigration in different areas in the UK and the crime rates in those areas. 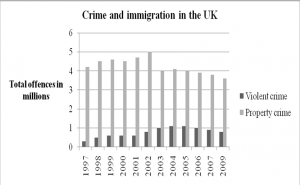 Most of the crimes committed are associated with immigrants. According to Swinford and Hughes (2016), over 700 notifications of a crime involving EU immigrants were issued per week in 2015, which represents a 40% increase over the past five years. The number of crimes involving immigrants has increased from 27,000 to approximately 37,000 in 2015. During this period, the number of EU immigrants to the UK increased to 3 million from 2.3 million, which represents a 30% increase (Swinford & Hughes 2016).  A report released by the Office of National Statistics in 2015 shows that some areas in the UK have experienced a considerable increase in the rate of crime. The reports attribute the increase to the growing number of migrants and the development of organised gangs (Barrett 2016). According to David Wilson, Criminology Professor at Birmingham City University, the growing pattern of immigration is one of the major factors that have contributed to the increase in murder in England and Wales (Barrett 2016). The table below illustrates the change in crime in England and Wales in 2015.

The table indicates that the rate of different types of crime has increased substantially. The relationship between the increase in the rate of immigration and the rate of crime can be explained on the basis of economic theory. The theory postulates that an increase in the number of immigrants into a particular region leads to the creation of opportunity costs (Bell & Machin 2011).

Immigrants face limited economic opportunities within the host country compared to the natives. This might trigger immigrants to engage in criminal activities compared to the natives (Nunziata 2015). Alternatively, an influx in the number of immigrants who possess a particular set of skills and knowledge relevant to the host country’s labour market needs may increase labour supply within a particular economic sector. This might limit employment opportunities for the natives. Moreover, an increase in labour supply will further mean that the rate of salaries and salaries in the affected sector will be reduced (Dustmann, Tommaso & Ian 2013; Lemos & Portes 2013).  These issues might increase the propensity of both the immigrants and the locals to engage in crime. Shortage of employment opportunities might trigger individuals to engage in a rational decision between engaging in the legal labour market and crime. According to the economic model of crime, an individual’s involvement in crime is based on a balance between the utility associated with legal and criminal activity (Bell & Machin 2011).

Contrary to the economic model, there is no empirical evidence to show that immigrants to the UK have taken jobs belonging to UK citizens (Card 2001).  A study conducted by the London School of Economics, Centre for Economic Performance shows that there is no evidence that immigrants into the UK have affected the job market, and level of wages or that they have contributed to crowding out of public services (Dearden 2016).

Comparison between the rate of crime between the asylum seekers and A8 immigrants on the basis of the property crime model shows that asylum seekers were relatively poor and hence likely to contribute to increase in property crime in areas characterised by an increase in asylum immigrants (Card, Dustmann & Preston 2012). Conversely, the A8 immigrants from Western Europe were well educated and hence likely to get a good job similar to the natives, which explains the reduction in property crimes experienced in the UK from 2004 (Bianchi, Buonanno &Pinotti 2012).  Despite the fact that the level of wage amongst the immigrants might be slightly lower compared to the natives, they relatively face a similar legal labour market (Bell & Machin 2011). Considering the fact that immigrants are well educated, they are likely to positively contribute to the host country’s economic growth. Consequently, policymakers should be largely concerned about how to ensure that immigrants are integrated into the national culture in order enhances the country’s economic growth (Shipley 2016).

However, in the recent past, there has been a considerable shift with reference to the association between crime and immigration. The shift has arisen from the emergence of a refugee crisis, which is considered to provide terrorists a chance to gain access to Western European countries hence making the immigrants to be perceived as a security threat (Keinis 2016). Despite the perception that immigrants contribute to increase in the rate of crime, it is not necessarily true that most of the crimes are committed by immigrants. This assertion is supported by a study conducted by Brian Bell, a researcher at the London School of Economics (Townsend 2013). In his opinion, immigrants are similar to locals in the UK. Thus, the propensity of immigrants involving in crime is considerably low if they access job opportunities in the host country (Townsend 2013).  This arises from the fact that the immigrants might not afford the legal costs associated with apprehension and conviction. Subsequently, immigrants are more likely to be convicted and deported as opposed to natives (Regional Business News 2016).   This finding is supported by the fixed-effect estimate conducted by Bell, Fasani and Machin (2013) which shows that neither the A8 immigrants nor the asylum seekers contribute significantly to the increase in violent crime in the UK.

Victimisation is one of the factors that have contributed to the increase in the association of immigrants with crime. Bell and Machin (2011) assert that immigrants tend to live in areas that are characterised by a large population of immigrants, commonly referred to as enclaves. Therefore, immigrants are more likely to be victims of crime as opposed to perpetrators. Nunziata (2015) is of the view that ‘both crime victimisation and crime perception are significantly correlated with the attitude of natives towards immigrants’ (p. 723).  This assertion is supported by the social disorganisation theory, which illustrates the relationship between crime and immigrants. According to this theory, immigrants increase the degree of instability in unstable neighbourhoods. For example, the theory contends that immigrants tend to increase structural disadvantages within a neighbourhood, which leads to the creation of a link between immigration and crime (Tawadros 2016). This means neighbourhoods characterised by an influx of immigrants are more prone to crime.  Damm (2009) asserts that ‘enclaves may inadvertently signal to outsiders that large group of immigrants are present, which may increase crime against them’ (p.281).  Currently, the victimisation of immigrants in the UK may be worsened by the increased assertion that international terrorist organisations are taking advantage of immigrations to infiltrate and destabilise the European region. Keinis (2016) cites the assertion by a Senior NATO commander that ‘countries such as Russia and Syria are deliberately using migration as an aggressive strategy towards Europe, and that they are weaponising migration’ (67). There is also an increase in the view that terrorists and extremist groups are concealing themselves in order to enter European countries (Keinis 2016). This assertion might increase the level of victimisation towards immigrants. Such sentiments might increase the rate of crime perpetrated towards the immigrants by the natives. This might arise from hate crimes and the creation of racism. According to Black and Solomos (2009), an increase in the incidence of racism and discrimination towards immigrants may trigger cultural intolerance and hostility. The ultimate effect is that the rate of crime towards both the natives and the immigrants will increase substantially. Moreover, crime toward the immigrants might arise from the creation of xenophobia, which refers to hatred perpetrated against foreigners (Bordeau 2010). On the basis of this aspect, there is a high probability of immigrants in the UK being perceived as outsiders by the natives. The ultimate effect is that neighbourhoods characterised by a large number of immigrants are perceived to be crime-prone (Kobeszko 2016).

The element of the crime cannot be fully ruled out with growing immigration. For example, an increase in the rate of immigration creates opportunity costs.  The immigrants face limited economic opportunities in the host country, which increases their propensity to commit a crime.

In spite of the assertion by the economic model, there is no sufficient empirical evidence to illustrate that crime increases with growth in the rate of immigration. Additionally, there is no tangible evidence to show that immigrants contribute to crowding out of jobs. One of the factors that might lead to an increase in crime relates to victimisation of immigrants. For example, the increase in extremist groups’ intention to infiltrate the European region has created fears that immigration provides an effective entry strategy. This aspect tends to increase violence perpetrated toward immigrants.  Therefore, victimisation of immigrants is a major aspect that has contributed to the development of the general perception that immigrants contribute to increase in the rate of crime.

Bell, B & Machin, S 2011, The impact of migration on crime and victimisation, Centre for Economic Performance, London.

Dustmann, C, Tommaso, F & Ian, P (2013), ‘The effect of immigration along the distribution of wages’,  Review of Economic

Keinis, V (2016), Free movement of persons as the cause of problems to prevent threats to national security, Riga Stradins University , Latvia.