Despite its prohibition by international laws, girl-child marriage still remains a pervasive abnormality, common in South Asia, as well as West and Central Africa. According to plan-international 15 million girls marry before the age of 18 each year and this is equivalent to one in every two seconds. The concept of girl-child marriage can be simply understood as the act of marrying an underage woman to an older man usually by her parents, and often without taking her volition and consent into consideration. This act of children’s human right violation has led to a number of unpleasant outcomes, with one of them being forced sexual relation and abuse.

A girl bride is often challenged with forced sexual relation as well as exploit from her older partner due to her lack of experience as well as adequate sex education. As a result of this, she is often seen, used and treated as an article of sexual satisfaction. This sexual abuse is sometimes associated with psychological distress and mental health problems that continue into adulthood as experienced in some victims. 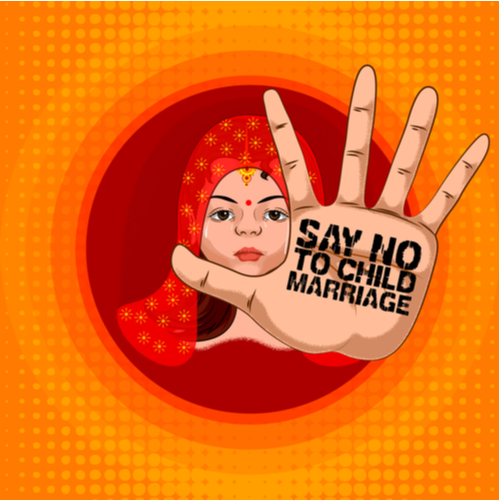 Say no to child marraige. Put an end to this henious tradition.

Another ugly consequence of girl-child marriage is the inability to enroll in formal education.Girls who are married are very much unlikely to be in school, consequently, they are denied of having their reasoning shaped.Education gives room for choices and opportunities in life and also allows for active participation in development projects, but the inability of these ones to enroll school only diminishes creativity and intelligence.Lack of formal education also strengthens the chain of poverty as victims lack the requisite to a better standard of living.

Moreover, early pregnancy and complicated child birth remains one of the glaring consequences of girl-child marriage as childbirth complications are common to adolescents. Experts anchored the reason behind this to the lack of a fully developed pelvis which can sometimes lead to the death of a young mother during childbirth. The risk of maternal death related to pregnancy and childbirth for adolescent girls between 15 and 19 years of age accounts for some 70,000 deaths each year.

From the foregoing, it can be deduced that the consequences of child marriage are cruel and unpleasant; therefore, it is quite pertinent to analyze its cause as well preventive measures that can be put in place to curtail it.

One of the causes of girl-child marriage is unarguably poverty. As witnessed in regions with acute poverty, child marriage is seen as a means of shedding off burden by the girl bride’s parents, as her well-being and survival becomes her husband’s responsibility immediately after marriage. This immiseration, as popularly observed in the affected regions has led many parents to giving out their female wards to older men usually in the hope of securing their future.

In addition, the lack of education in most victims and their parents equally tends to promote this crime. And this is because both victimized parent and ward often lack the awareness; they do not have the knowledge of the likely implications associated with marrying at a tender age.

Furthermore, culture and tradition remains one of the major factors that determine a person; the way he dresses, how he behaves and so on. Therefore, in areas where the act of marrying off a girl at a tender age has been woven into the thin fabrics of culture and tradition, it is usually difficult for an adherent to deviate from such doctrine, irrespective of their level of education. And this can be observed in the Northern part of Nigeria, West Africa.

Another cause of this abnormality is the sexual segregation/patriarchal values attached to male children. Many families see girl-child marriage as a means of curbing the unwanted competition between male and female children. They believe once a girl is married off, she no longer has the right to her father’s home and by so doing, ensuring male dominance. This sexual segregation has therefore led many parents to forcing their female wards to early marriage as popular in West Africa.

Moreover, unwanted pregnancy in a girl’s early life as a result of premarital sex has claimed responsibility for a number of girl marriages as evident in Nigeria. Parents in this region see it as a taboo for a woman to continue living in her parent’s apartment after being impregnated. As such, they are married off immediately, to whoever is responsible for their pregnancy.

The causes and effects of child marriage cannot be over emphasized, but it is very much imperative at this juncture, to enumerate the preventive measures that can be put in place to ensure that child marriage seize to exist, and some of them are:

In conclusion, girl-child marriage is an infringement of children’s human right and as such should not be tolerated in the society.

Formal Education In Nigeria- How To Take Advantage Of It
The Causes, Effects, And Solutions Of AIDS In Nigeria
The Veto Power Of Permanent Members Of The United Nations
All Fingers Are Not Equal
Let Us Protect Elephants
Feminism