You will stay inside your homes at all times…

You will not … show your face…

Girls are forbidden from attending school…

Women are forbidden from working…

When the Taliban was in power in Afghanistan, women were treated like errant sheep: never to be seen without their master, forbidden from individuality, and flogged at the slightest hint of happiness. Wives were cargo, preciously wrapped and dangerously guarded from the supposed evils of the world. They were trained like dogs for submission, so much so that the notion of even standing up to one’s brother was banished by the thought of the welts from the floggings to come.

As a Nigerian, gender inequality begins from the womb. ‘Ah, another girl?’ the mother-in-law asks. ‘Finally, a boy!’ the community cries. It has been ingrained on our minds that no matter how many girls a woman might bring into this world, they will never be as valuable as one boy. Women all over the world have been shoved aside, polished and stored in a trophy case, or just blatantly disregarded for centuries. Feminism, in all its new-age glory, aims to smash the glass ceiling and any other barrier, physical or mental, that holds either gender from being the best version of them they were created to be. It is as much for the working man with a dangerously high blood pressure as the imprisoned housewife begging to utilise her degree.

Feminism: the belief that men and women should have equal rights and opportunities.

One major challenge feminism, as a concept, faces is that it is widely misunderstood. So many people, men and women alike, throw the word left, right and centre without actually understanding everything it entails. Ignorance is to feminism what Kryptonite is to Superman: it weakens the concept, making it seem as sketchy and petty as the false propagators themselves.

Feminism: A much debated topic over social media.

In this day and age, social networks such as Twitter are the hub of all opinions: young and old, black and white, utterly foolish and apparently intelligent. As a result, they are also the meeting grounds of many misconceptions about several ideologies, feminism included. A typical day on my Twitter timeline sees one misogynistic comment or the other, whether concerning the never-ending debate on ‘wives-not-cooks’, or simply disparaging feminism as a whole. Men are not left out of the hate train as half of Twitter’s female population has apparently concluded all men are conceited entitled pigs. Some of these avid ‘Twitter feminists’ who disseminate their misandry and need for favouritism under the guise of feminism are the reason why the concept is treated more like a political party than a quest for equality. All the claims and propaganda flying about have swindled people into believing that feminism is reserved for the aggressive, single and man-hating. 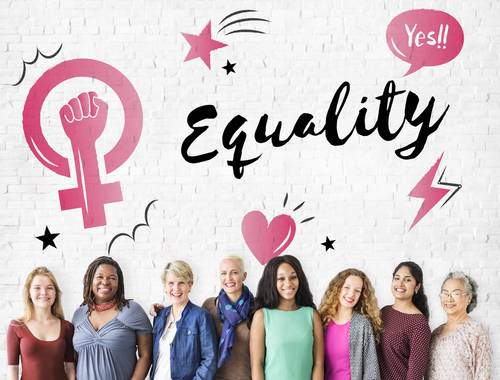 Feminism focuses on perceiving women as strong and powerful individuals.

The fact that the word ‘feminism’ has female undertones is highly misleading, so some people tend to forget that feminism, also known as gender equality, involves both sexes. I grew up believing boys were incapable of the same emotions as girls; boys were only expected to be boisterously happy or mildly angry, never sad, love-struck, frustrated or all those beautiful emotions girls are allowed to feel. Men had the emotional depth of a teaspoon and that was that. They are graciously given a stencil to fill: a mean, lean money-making machine. Even in a unit as intimate as the family, the father is, as a rule, distant from the children and only to be seen at night when his food is to be served and his briefcase and other money-making instruments unloaded. I grew up with this awful macho image of men and watched as these expectations ruined relationships, sent some men into depression and limited the growth of others that could never ask for help. They were meant to have all the answers, weren’t they? The beauty of feminism is in the individuality. A person’s having a penis or a vagina does not predetermine who the person is going to be or how the person is going to love. In fact, it does not conclude anything except who is buying the tampons. With gender equality, men are allowed to be actual people with emotions, fears and insecurities, not just stoic caricatures of masculinity.

The battle for women to be acknowledged as full-fledged human beings did not start today. In the nineteenth century, a time where women were to be seen, not heard, the concept of gender equality was even more preposterous and controversial. Imagine fighting for reproductive rights during a period when wives were only property to be milked for an heir. I cannot even begin to fathom how frustrating it must have been convincing the traditional nineteenth century African man that his daughters are good for anything other than their bride prices and their skills in the kitchen. It seems like the worst of male chauvinism and gender discrimination has been conquered by those that fought before us and feminism is no longer relevant in our modern society. Some believe that since women in most places are allowed to go to school or work, any cry of gender-based foul play is therefore unnecessary and attention-seeking.

We talk as if women are not still objectified and treated like perpetual subordinates in some places, as if leadership and other important positions are not still seen as beyond the woman’s reach. We act as if all women are afforded the luxury of simultaneously having a successful career and a loving home, as if all women are identified by their intellect or skill set, and not by their sexuality. Feminism aims to break through not only the institutional barriers to gender equality, but also the limitations and stereotypes that have long since been etched into our culture, beliefs and society as a whole. When anyone, male or female, denounces feminism, he or she disrespects every person that has ever fought for equality: from Martin Luther King Jr. to Mrs. Funmilayo Ransome Kuti. The concept is one of many that fight to preserve the humanity of people, to ensure that each person is allowed the dignity they deserve. Half of the world’s population cannot continue to be tied down by imaginary ropes and super-sized egos. Perfect or flawed, perilous or smooth, the woman’s destiny is hers and her Creator’s to decide.

Written and submitted by- Ugonma Nkata